Into the Badlands Jackets & Coats Into the Badlands Aramis Knight Vest Into the Badlands Ally Ioannides Coat Into the Badlands Lewis Tan Coat Into the Badlands Oliver Stark Coat Into the Badlands Sunny Red Coat 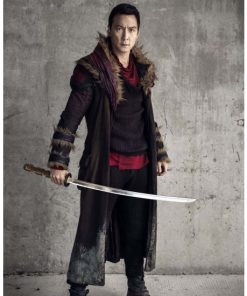 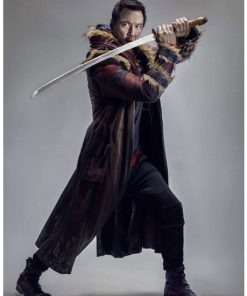 Into the Badlands Sunny Trench Coat

Into the Badlands Jackets & Coats

INTO THE BADLANDS OUTFITS are plentiful in the Jacketars. It features attractive apparel that will entice you to fall in love with it. Look for the right item for you and put it on to flaunt your wonderful beauty. High-end materials were used in the creation of each costume. This INTO THE BADLANDS Jackets Collection includes a wide range of trendy outerwear with voguish features.

On November 15, 2015, AMC premiered the American television series Into the Badlands. “Into the Badlands has been described as a “high-octane sci-fi martial arts series” and a “post-apocalyptic drama.” A warrior and a small child embark on a quest for enlightenment across a dreadful feudal realm in this story. AMC canceled the show after three seasons on February 9, 2019. The series finale aired on May 6, 2019.

500 years from now, war has caused damage to the earth. The Badlands, a region of former North American nations, is ruled by the Barons, a group of seven men and women who administer their territory and raise armies of violent soldiers known as Clippers. Regent Sunny, a fearsome warrior and Baron Quinn's most dangerous “Head Clipper,” takes on the Nomads and saves a mysterious teenager named M.K., who has a terrible secret about his past. When he invites another pupil back to The Fort to train as a “Colt,” a Clipper-in-training, things quickly get out of hand. After the first blood is drawn, M.K. loses control of himself, as if something takes over his body, making the boy valuable to a competing baron.

INTO THE BADLANDS OUTFITS

Lewis Tan is a film, television, and theater actor that consistently outperforms everyone in his area. In season three of the TV series Into The Badlands, he portrays Gaius Chau regularly. The warrior-themed collection includes a wide range of costumes for cosplayers and comic-con attendees. This Into The Badlands Lewis Tan Coat features a stunning velvet upper layer with a viscose inner lining!

The high-end clothing features a shirt-style collar with buttoned cuffs and a double-breasted button closure. The historical characteristics add to the classic aspect of the piece while adding a few new accents to emphasize quality and comfort.

Genuine leather is used to create the Daniel Wu Into The Badlands Coat. The coat is so well-made that you can't take your gaze away from it. This daniel wu coat is so appealing that it will undoubtedly capture people's notice. Because of the soft inner viscose lining, the sunny coat is comfortable to wear. This bright coat has a fur border collar, full-length sleeves, and fur stripe cuffs, which adds to its attractiveness.

Is Into the Badlands season 4 coming out?

All of the main cast members, including Daniel Wu, thanked the audience for a wonderful run of Into the Badlands and expressed regret for having to leave it. We can only confirm that the series will be terminated by AMC in January 2022.

Did Into the Badlands get canceled?

Into the Badlands is a post-apocalyptic martial arts science fiction drama. The series premiered in November 2015 on AMC. The show was then released on AMC for three seasons. The show was canceled by AMC on February 9, 2019, announcing that the third season is the series' final season.

Is Into the Badlands worth watching?

Overall, it's a good start to what might be an engaging and entertaining series. If you're looking for a fun action series, you couldn't do much worse than this. Except for Marton Csokas, who is enamored with his Baronial position, the Badlands lack an interesting cast of characters.

Is it into the Badland on Netflix?

A fearsome warrior and a mysterious boy fight territorial warlords and their well-trained killers, dreaming of escaping to a faraway city. You are free to watch as much as you like.

Where did the Badlands take place?

To create this bizarre retro-futuristic country, Into the Badlands was shot in and around New Orleans, Louisiana. In season two, the production moved to Ireland.

Why did they discontinue Into the Badlands?

The third season of AMC's Into the Badlands is coming to a close, and the cancellation appears to be owing to dwindling viewership and ratings. Although it wasn't entirely unexpected, fans were disappointed to learn that Into the Badlands would be ending after season 3.

Is Into the Badlands based on a book?

Into The Badlands, Brian J. Jarrett's debut novel is his first book. It's a fast-paced post-apocalyptic thriller that leads readers on a desperate hunt for salvation amid the wrecked remains of land overrun by the stuff of nightmares.

Is Into the Badlands season 3 on Netflix?

In 2018, AMC will broadcast Into the Badlands again, and it will ultimately be available on Netflix in the United States, but you'll have to wait a long time. On the dates listed below, Season 3 of Into the Badlands will be accessible on Netflix. Season 3B is slated to begin on AMC later that year, and Netflix began streaming part 1 of season 3 in March 2019.