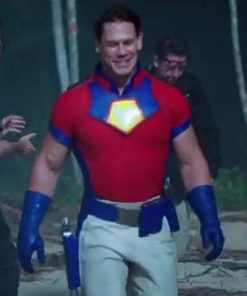 When was the last time you witnessed superheroes fighting for world peace and protecting the globe from the devil's gaze? Peacemakers is one of the most popular television shows, with its adventurous qualities impressing audiences. the series is so popular. Also, there are a lot of Peacemaker Outerwear to choose from.

Peacemaker is an American superhero television series inspired by the DC Comics figure Peacemaker, produced by James Gunn for the HBO Max streaming service. This is the first tv show in the DC Ultimate Universe (DCEU) and a spin-off from the 2021 film The Suicide Squad. The series follows the story of jingoistic killer Christopher Smith / Peacemaker following the events of the film. The Safran Company and Troll Court Entertainment are producing it in collaboration with Warner Bros. Television, while Gunn is serving as showrunner

The series follows Christopher Smith/Peacemaker as he is enlisted by an ARGUS black ops squad lead by Clemson Murn for “Project Butterfly. Further, a mission to eliminate parasitic butterfly-like insects five months after the events of The Suicide Squad.

Peacemaker Jackets are just one of the many costume collections available at the Jacketars to assist you to add to your outfit.

Winter is the ideal season for jackets to become indispensable. When it comes to jackets, many people favor high-quality coats. As a result, we are dedicated to providing you with high-quality coats. Jackets also provide us with a fashionable appearance, as well as protecting us from severe winds and never making us feel uncomfortable, as well as creating a trendy appearance. In addition, when a person is looking for winter basics, he or she always wants the jacket to have current and fashionable features. As you can see, the Peacemaker collection has a diverse selection of jackets that will leave you dumbfounded.

We are dedicated to delivering you the jacket of your choice as part of our goal.

Even though Peacemaker fashion raised eyebrows in the fashion world with its voguish attire, it is one of the best shows out there, with an incredible storyline and attractive characters that dazzled their viewers with their performances and spectacular costumes.

This TV show concentrates on a variety of jacket types that provide us with exquisite and stylish outfits to pick from.

Fans love all of the Peacemaker clothes, and each one is unique in its way, with that voguish quality to brighten up your wardrobe, but there are a couple that is fiendishly out of this world. We'd like to call your attention to a few amazing costumes from the collection. With this stunning Peacemaker Jennifer Holland Jacket, you may convert your critics into fans while also increasing your daring and great image. The recommended Black Puffer Jacket has made from high-quality parachute fabric. The jacket is only available in Black, which is a pleasing color. You can visit  Women's Puffer Jackets to see our full collection. You may also acquire Peacemaker The Suicide Squad Jacket to look like him in the movie. Wait till you hear about its unique characteristics, which include PU leather on the surface and soft inner viscose lining on the interior to ensure your ongoing comfort. A stand-up collar with a front zippered fastening is one of the key characteristics. This jaw-dropping jacket will make you look as macho as John Cena in the movie! Hold yourself and check your Comic-Con Costumes, to look stylish.

Fans and followers nowadays find dressing up as their favorite character to be fascinating. It may differ from person to person in terms of preferred style and hues for luring those in the vicinity. This Peacemaker jacket assortment, in the end, covers all the demanding apparel that is attractive enough to give you a fantastic appearance. Our top-ranked collections, on the other hand, comprise all of the show's classic ensembles.

Is Peacemaker the bad guy?

Despite his extreme violence and a trail of bodies he doesn't hesitate to leave behind, Peacemaker thinks himself a hero.

Is Peacemaker a decent series to watch?

Will there be a second season of Peacemaker?

The good news is that Peacemaker has been extended for a second season, which means he'll get another chance to hurl expletives. Peacemaker was “one of the great joys of my life, both professionally and otherwise,” according to James Gunn. But that isn't the only thing he's said this season.

Do you think Peacemaker is the finest DC show?

The best-reviewed entry in the DCEU canon is now Peacemaker. Christopher Smith, alias Peacemaker (John Cena), partners up with a new black ops organization to fight down a nefarious threat known as Butterflies in this spin-off series from the 2021 blockbuster The Suicide Squad.

What is the superpower of peacemakers?

Peacemaker is a fictional superhero who has featured in both the Charlton and the DC Universes.

Is Peacemaker a Suicide Squad member?

Unlike in the DCEU, Peacemaker has never been a member of the Suicide Squad in the books. That changed with the relaunch of DC's 2021 comic, which took use of the character's live-action debut.

Who is the best buddy of the peacemaker?

Leota Adebayo is a Wonderful Companion.

The central relationship in “Peacemaker” is that between Leota Adebayo (Danielle Brooks) and Peacemaker, who goes by the name Christopher Smith.

Is Peacemaker a hit or a flop?

“Peacemaker” isn't merely a hit with the audience. It received a Rotten Tomatoes score of 94 percent from critics.